The fourth RCEP agreement was officially signed on November 15, marking the world's largest free trade agreement officially concluded. This agreement accelerated the recovery of the economy under the epidemic. significantly reduced tariffs, promoting the import and export trade between countries and regions, benefits the LED display market. NSE as a professional display manufacturer, the annual export volume covers half of the global market. After the signing of RCEP, on the one hand, accelerate the export production of LED Display. on the other hand, more convenient for customers to buy. 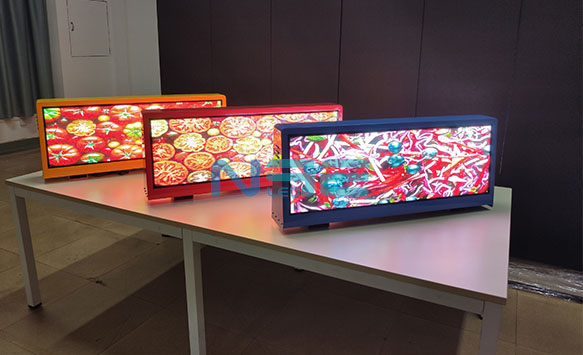 This year, people’s life has been greatly affected by the epidemic. they couldn’t go outside, as usual, also the import volume of the LED display market decreased a lot. A part of companies chose the traditional advertising screens for publicity. However, there are some limitations of traditional advertising screens. The advertising effects far less effective than current popular outdoor taxi signage. As we all know, taxis just like a bridge to connect urban traffic. Especially in the epidemic period, the utilization rates of buses, subways, and high-speed rails decreased. On the contrary, the utilization rates of taxis increased sharply. Because it's safe, only have a few passengers in one taxi, and have a comfortable environment. also very fast, so becomes the best choice for the majority of people go outside. Meanwhile, the effects of advertising publicity more superior than traditional advertising screens. The innovative advertising methods, attract a lot of attention from passers-by. enhances the exposure of commercial advertising.

NSE Car Top screens all over the world

Although car top screens is a newly emerging market. it has been already operating in many countries, such as the United States, Thailand, Canada, Malaysia, etc. As we all know, the United States, as the top one led display market in the world. achieved a lot in the outdoor advertising industry. Besides, the car top screens as a newly emerging mobile advertising is continually growing. which promoted the economic development of neighboring countries. NSE as a professional manufacture of led display supplier will supply more than 600units taxi screens each month. except the market of the USA, Thailand, Canada, Poland, Egypt, and other countries. Particularly in recent years, with the widespread uses of display screens, taxi screen as a new outdoor mobile advertising frequently appeared in people’s life. attracts many enterprises to invest it. It has a unique design, very easy to operate. also supports sending programs anytime. At present, the market of taxi screens very popular in the United States. as well as some North American and African countries. such as Dominica, Botswana, and Serbia. Those who have bought samples before, after using it in local, gradually plan to start a big project. Although the initial costs of investment is very high and the project takes a long time to complete, meanwhile, the rewards will be far from the investment. Moreover, on the basis of the signing of the RCEP, it invisibly beneficial to the taxi market and import and export trade. Also, taxi screens have large output, more intelligent, and have good advertising effects, Have been becoming the first choice for outdoor mobile signage. In view of the current market situation, the taxi top screen market will be mass-applied in all over the world in the future.