According to the current taxi market situation. with a growing number of taxis on the road, driving the taxi signage market. Even some advertising companies show their advertising through place led screens in their car top. Already become an efficient way of promoting their clients, and engaging passengers take a ride. Additionally, taxi rooftop advertising is a constantly moving system. allowing potential customers to view advertisements.

Especially in Central Asia and Eastern Europe. such as Kazakhstan, Uzbekistan, Romania, Croatia, Serbia, Bulgaria, Georgia, etc. Romania has an excellent geographical location, in the southeastern part of Central Europe, bordering Hungary in the northwest. Dominated by the economy of automobile industry and tourist economy. Under the rapid development of the automobile and tourism industry, taxi led sign as a carrier of mobile advertising will draw a lot of attention from passer-by. Fascinating the majority of new Taxi enterprises to invest such a good development prospect business.

NSE LED as the biggest taxi roof signs suppliers. will be sold more than 300 units taxi led sign to South America and Europe each month. Meanwhile, we already have more than 500 units led taxi sign under operation in Central Asia and Eastern Europe. As you can see, taxi rooftop advertising has become one of the most popular outdoor mobile advertising. Like the new markets of Central Asia and Eastern Europe, trucks and trailers are commonly used for their outdoor advertising. compared with taxi led sign, they are old-style, the quantity can not compatible with taxi led sign. the advertising effect far less than the growth of led taxi sign. Therefore, taxi rooftop advertising will become the superior choice for outdoor mobile signage.

As Christmas vacation coming soon. we prepared more than 300 units of led taxi sign for the impending projects. if you have any interests, welcome to have a further discussion with us now. Our NSE LED team will be willing to help you. 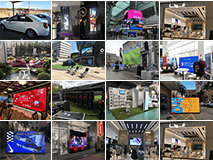